In honor of the Olympics, today I would like to share a fun article with you, entitled, ‘Is There a Gene for Winning Gold Medals? The nature and nurture of sporting excellence.’ This article talks about a few theories on how someone can achieve gold-metal status in their desired sport or discipline. It mentions the ever-famous, “10,000-hour rule,” as well as body type and sporting achievement.  This is an interesting read so if you have a minute, take a look and see what you think! 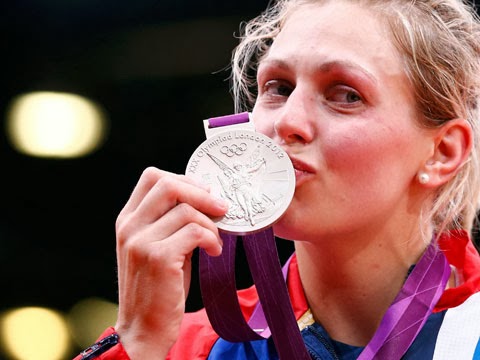 The nature and nurture of sporting excellence
Published on December 4, 2013 by Steve Stewart-Williams in The Nature-Nurture-Nietzsche Blog
0
inShare

I recently came across a very interesting interview on the EconTalk website. The interviewee was the sports journalist David Epstein, and the topic of discussion was Epstein’s recent book, The Sports Gene. This book – an exploration of the nature and nurture of sporting achievement – has been flying off the shelves over the last few months. In fact, a copy recently flew into the hands of President Barack Obama, who bought it for someone as a Christmas present. Obama’s tacit endorsement of the book and its subject matter is noteworthy. You see, The Sports Gene is somewhat controversial. It’s controversial because it deals with sex differences and racial/ethnic differences in elite sports performance, and because it doesn’t attribute these differences entirely to nurture. Nature, says Epstein, plays an important role as well.
I have to say I’m not a big fan of the book’s title. There’s no single gene for prowess in sports, and genes aren’t all that matters. But Epstein knows this, and the book itself is excellent. If you’re wondering whether to add it to your own Christmas list, I recommend checking out theEconTalk interview. It covers a good range of the topics from the book. Here’s a sample…

The 10,000-Hour Rule
The 10,000-hour rule is the idea, popularized by Malcolm Gladwell, that you can attain mastery in any field if you just devote 10,000 hours to it. Whether you want to be a chess grandmaster, the next Jimi Hendrix, or the next Tiger Woods, natural talent is basically irrelevant. All you need is 10,000 hours of dedicated practice. Unsurprisingly, it ain’t quite so simple. The rule does have its origins in some perfectly good research. But this research doesn’t show that anyone can master anything in 10,000 hours. For one thing, 10,000 hours is an average, and there’s a huge range of variation on either side of the average—enough that it’s misleading to say even that approximately 10,000 hours is what it takes.
Epstein makes this point vividly with the story of Stefan Holm. Holm won Gold in the high jump at the 2004 Olympics. In interviews, he explained his success in terms of the 10,000 hour rule: He’d put in more than 10,000 hours—indeed, he’d put in more than 20,000—and he was now reaping the reward. But in 2007, at the World Championships in Japan, Holm went up against Donald Thomas. Thomas had started his high jumping career only months before, when a friend bet him that he couldn’t clear the 6’6” bar. As you’ve probably guessed, Thomas beat Holm and won the gold. So, Holm had put in 20,000 hours, whereas Thomas had put in closer to zero. The average was around 10,000 hours. But the newbie won. Obviously, practice matters. Equally obviously, though, talent matters too. And sometimes it matters a lot.

Body Type and Sporting Achievement
But what exactly is talent? If we define it loosely as anything other than practice, then it includes a very wide range of factors. One of these factors is body type. Bodies come in all shapes and sizes, and some shapes and sizes are better for certain sports than others. Body type is so important that, according to Epstein, if we had a list of the heights and weights of all Olympic competitors, and even if we knew nothing else about them, we could correctly guess their events in almost every case. Looking at body type helps answer a number of questions:

Group Differences
The discussion of body type leads naturally into the topic of ethnic differences in sporting achievement. Anyone with even a passing acquaintance with international sports knows that certain ethnic groups predominate in certain events. So, for instance, many short-distance runners trace their ancestry to West Africa, whereas many long-distance runners trace theirs to a particular region of East Africa. As I mentioned, ethnic differences in sporting achievement are rather controversial. But they’re also hard not to notice. This leads to the rather peculiar situation where everyone sees the difference but “right-thinking” people pretend that they haven’t. In case you doubt that these ethnic or racial differences are controversial, Epstein points out that many of the sports scientists he interviewed would only discuss the issue on the condition of anonymity.

Of course, the whole topic is less controversial if you chalk everything up to environmental or cultural factors. But Epstein doesn’t take that path. Nor, though, does he chalk it all up to biology. Instead, he credits group differences to a complex interaction of the two factors. Epstein is a journalist, not an academic. However, in my view, he does a better job of integrating nature and nurture than most academics. I’ll give you some examples.

West African Success in Short-Distance Running
Consider, first, group differences in short-distance running. Nature or nurture? Well, it can’t be all nurture. After all, since 1980, every man who’s won the 100-metre Olympic sprint, whether he’s come from the U.S., Canada, Portugal, Nigeria, or the Netherlands, can trace his ancestry to West Africa. So can an overwhelming number of female sprinters. There are a number of reasons to think that people with this ancestry would be advantaged in running. First, the area of West Africa that produces all these champions sits at a low latitude. A general trend among mammals and birds, known as Allen’s rule, is that populations living nearer to the equator evolve longer limbs relative to their body size. In humans, this bodily configuration is good for running but bad for swimming (recall Phelps’ long torso and short legs). In addition, people of West African descent appear to have a higher proportion of fast twitch muscle fibers, which are good for explosive bursts of activity. Epstein argues that this relates to the evolution of adaptations against malaria among populations living in West Africa (long story). Note that theaverage differences between West Africans and other groups aren’t necessarily very large. But even small differences at the average are often associated with much larger differences at the extreme of the distribution. Thus, even if the differences are relatively modest in the general population, among elite athletes, they may be striking.

In any case, West African success in sprinting can’t all be nurture. But it also can’t be all nature. As Epstein notes, Jamaica is a much smaller country than the US, but it produces more champion sprinters per capita. A lot more. A large part of the explanation for this is cultural. As a nation, Jamaicans love their track-and-field. Like rugby in New Zealand or football in the UK, track-and-field is a national obsession. Epstein reports that as many as 30,000 people will turn up to watch the National High School championships. The sprinting culture in Jamaica means that there’s very little chance that any talented runner will fall through the cracks and escape notice. Thus, culture and biology conspire to produce Jamaican sprinting success.

East African Success in Long-Distance Running
Whereas people of West African descent dominate in sprinting, people of East African descent dominate in long-distance events. In the entire history of United States, 17 men have run a 26.2 mile marathon in less than 2 hours and 10 minutes. In contrast, in a single month – October of 2011 – 32 Kenyan men did exactly that. To be more precise, 32 Kenyan men of the Kalenjin ethnic group made that time. Although people living outside Kenya tend to view Kenyans as great long-distance runners, Kenyans themselves don’t see it that way. They view the Kalenjin as great long-distance runners. The Kalenjin make up only ten percent of the Kenyan population, but around 80 percent of elite long-distance runners are drawn from their ranks. Again, nature and nurture both seem to be involved.To begin with, the Kalenjin have an ideal body type for long-distance running. Like West Africans, their ancestors lived near the equator. As a result, they too have long limbs relative to body size. In addition, though, their lower legs are very slender. This means they have what’s called “low distal weight”—that is, they have relatively little weight away from their centre of mass. This “Nilotic” body type dramatically lowers the energetic costs of running. This is important for long-distance events, where you’ve got to keep up a good pace for a long, long time.

So, those are some of the contributions of nature. What about nurture? To begin with, a lot of Kenyans run to and from school, and their schools are often many miles away. As a result, they soon discover who the best runners are. They’re also primed for training: They’re used to running and they’re not overweight. In the West, many people who could potentially be good runners never find out because they’re couch potatoes and they never give it a go. Economics also play a role. Because Kenya is a poor country, there’s little “opportunity cost” associated with trying to make it as a runner. Very few people have to choose between training and going to medical school. They have little to lose, and a great deal to gain, and thus many people try. Most fail. But a handful make it, and they’re the ones whose names we all know.

Overcoming Loneliness: There is a way to reconnect when you feel alone in the world.

How to Cope with Personal and Global Uncertainty